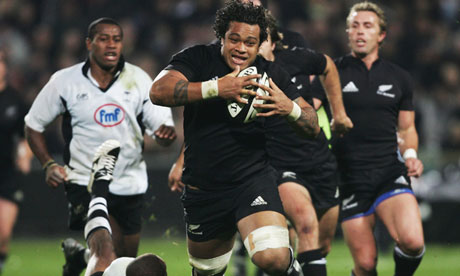 Sione Louaki of the All Blacks breaks through the tackle of Norma Ligairi of Fiji in North Harbour Stadium, 2005. Photograph: Shaun Botterill/Getty Images
The All Blacks have poured cold water on Fiji's 100th anniversary by saying they are too busy to play them in a commemorative Test.
The Fijian Rugby Union wrote to the New Zealand Rugby Union (NZRU) in August 2012 seeking agreement for a June Test in Suva, Fiji's capital, to mark the occasion. Their offer was rejected, the NZRU citing the All Blacks' already full schedule, according to nzherald.co.nz.
However, the NZRU organised a Test at short notice against Fiji in 2011 when it suited the All Blacks' World Cup preparation and Fiji, along with the smaller nations, feel they are being neglected by the larger nations. Tonga and Samoa have also sought to host the All Blacks only to be similarly rebuffed.
After being rejected by other Test-playing nations, too, Fiji will instead play a Classic All Blacks side featuring relatively recent Test players such as Chris Masoe, Jerome Kaino, Joe Rokocoko and Sitiveni Sivivatu, along with the veterans Carlos Spencer and Justin Marshall.

Thats what happens when Karma turns on ya, eh Tikoitonga ? Now look who is "insignificant".