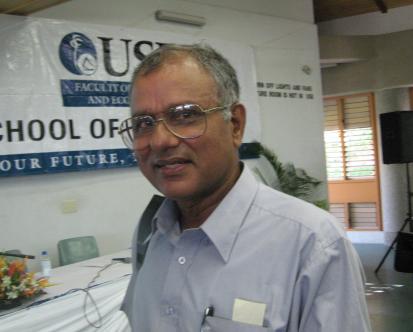 PFF, Rarotonga - The Pacific Freedom Forum is welcoming publication of a speech from a speaker stopped from presenting at the University of the South Pacific on World Press Freedom Day.

“We praise the bravery of the magazine publishers operating under a military regime with limited understanding of benefits stemming from open debate,” says PFF Chair Titi Gabi.

“We also support Dr Narsey in criticising a trend towards blaming journalists for policy and practice that comes from editors, publishers or outside of news media.”

“Media freedom in Fiji is one thing, but a regional university such as USP must engage with authorities to ensure that wider impacts are avoided.”

PFF co-Chair Monica Miller, based in Pago Pago, said that WPFD 2013 would have been the ideal opportunity for university authorities to raise debate around freedoms of speech ahead of elections scheduled for next year.

“How is it that better preparations were not laid for this most fundamental of freedoms?”

His comments are reproduced here:

“What journalists need to do ... is to keep a record of all the stories they write, the dates they submit to the editors, and the story that appears or does not appear.

“Some day, media censorship will end and our society will return to practicing their human right to freedom of expression.

“As part of our attempt to understand this period in Fiji’s sad history, there will also be studies  of the nature and frequency of media censorship during this time.

“The records maintained by journalists and principled editors will be an invaluable part of the history from which our future generations can learn.

“Journalism has as much a part to play in the history of our people as any other academic discipline such as history, politics or economics.

“Journalism may be the most important given its centrality in informing public opinion, which is the cornerstone of any true democracy.”

See other PFF releases on Fiji.

ABOUT PFF :
The Pacific Freedom Forum are a regional and global online network of Pacific media colleagues, with the specific intent of raising awareness and advocacy of the right of Pacific people to enjoy freedom of expression and be served by a free and independent media. We believe in the critical and basic link between these freedoms, and the vision of democratic and participatory governance pledged by our leaders in their endorsement of the Pacific Plan and other commitments to good governance. In support of the above, our key focus is monitoring threats to media freedom and bringing issues of concern to the attention of the wider regional and international community.