If Bainimarama and his cohorts (especially those in Geneva at this time) mistakenly thought that they could pull the wool over the eyes of the presiding Working Group of the Human Rights Council's 7th Universal Periodic Review, they should now know how sadly mistaken they were.

And they should also by now have a good idea about the nature of the outcome they will receive.

Despite the pathetic presentation made by Peceli Vocea, who is now very evidently Fiji's treasonous Permanent Representative of Fiji to the European Union, the reactions of the Working Group members to Fiji's submission was overwhelmingly clear -- Fiji's glossed over submission was not bought, and the Working Group clearly expressed their serious concerns on the status of human rights in Fiji especially related to the lack of freedom of expression, the lack of media freedom, the lack of independence of the judiciary, and the muzzling of public opinion via the Public Emergency Regulations.
Listen to Peceli Vocea's spiel here.

Peceli Vocea is pictured here on the left.
Key statements of Vocea in support as a member of the treasonous terrorist group of Bainimarama et al are as follows:
At the 1:15 mark:

"As I make this contributions the Government of Fiji, together with thousands of my fellow citizens eagerly awaits the outcome and recommendations of this process"

"I respectfully wish to draw the attention of the working group to these salient factors in assessing the human rights situation in Fiji it is utterly vital that the following is borne in mind: Fiji is a country in political transition. Fiji is now being governed under a new legal order and the Government of the Republic of Fiji welcomes this interactive reporting process and regards it as an opportunity to declare the current status of its human rights situation employing such a status as a benchmark for future human rights reporting, hoping that in areas found wanting, it will be improved upon in future reviews."

Bafflingly, Vocea even finds the need to highlight the non-participation of 2 NGO's in the preparation of their submission as if to tell tales. He then audiciously urges the Council to force people to cooperate with an illegal and treasonous regime!! Check it out at the 3:50 mark:

"I must admit however that in the preparation of the national report two prominent non government organisations namely the Fiji Women's Rights Movement and the Fiji Women's Crisis Centre refused outright to participate in the consultation process. The Government respects their stance but would urge the Council to encourage cooperation and partnership between NGO's and Government's, especially in the field of human rights.

Fiji is such a small country going through a period of political transition. The Government and the women of Fiji need this cooperation to further improve the status of women in Fiji."

The following countries then responded. Apart from China (no surprises there), Morocco, Maldives and Malaysia -- all comments from the Working Group were spot on.
Check them out here: 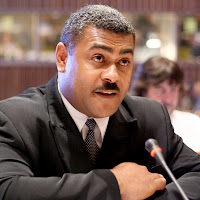 A second treasonous terrorist then takes the floor to respond to the questions and concerns of the Working Group members. Mr. Sainivalati S. Navoti, Director Political and Treaties at Fiji Foreign Affairs (and himself a former military man) makes his intervention.
Note that Navoti's treasonous lies can be found at the 4:04 mark:


"Mr President concerns has been raised in relation to the general theme of rights to life, liberty, and security of persons. References were made specifically on allegations of death whilst in police or military custody. I am to report that all cases involving death in custody have been dealt with by the courts. Perpetrators of human rights breaches involved in these cases have all been charged, prosecuted and convicted.

Given their publicity I wish to highlight 4 cases in particular. First involving Mr Josefa Baleiloa. Reports and allegations that this case has not reached the court due to files gone missing is misleading. The office of the Attorney General, on the request of the magistracy is now conducting an inquest into this case.

The case regarding Mr. Tevita Malasebe has been heard and disposed of by the courts. Offenders are now serving time.

Further the 9 officers involved in the manslaughter of Mr Sakiusa Rabaka were tried and all convicted by the High Court.

So was the case involving the death of Mr. Nimilote Verebasaga. The officers involved were also convicted of manslaughter.

I am also to report that the Fiji Police and the Fiji Military Forces are now actively engaging in training campaign to teach their respective force members of best human rights practices including conduct during emergency situations.

Mr. President concerns were also raised regarding alleged incidents of arbitrary arrests and detention of human rights defenders and pro-democracy activists. Information gathered by Government confirms that the authorities who ordinarily would have the responsibility of receiving complaints and conducting investigations into these alleged claims, did not officially receive any. "

What a shame and a sham for the people of Fiji who pay for such imbeciles.

These kinds of performances can no longer be hidden behind a justification such as the need to put food on the table.

They have just included themselves in the now expanding line-up of parties to The Hague.
Posted by Keep The Faith

Thank you for a well presented article.

You are absolutely correct in your summary; the nations of the world have NOT been fooled by the lies dished up by the jaundiced junta.

It is interesting to note that most delegates referred to the "interim government of Fiji'. This is hardly an acceptance of bananasinpyjamas' bunch of bungling baboons.

It is also interesting to look at the comments from the UN members.

NZ - 'concerned about the political situation in Fiji'

Korea - 'return to democracy' - 'PER not compatible with human rights'

Australia - 'situation in Fiji has deteriorated'

Switzerland - 'regrets Fiji is not having elections'

Chile - 'concern for civil and political rights of citizens of Fiji'

It is obvious that the UN human rights group haven't been fooled by the lies spewed up by the illegal incompetent fools.